I ate some amazing food during my weeklong adventure in London. I knew I would! I was salivating right and left when I was doing my research before leaving. I always have an epic plan before I leave for any international trip – I research museums, events, markets, and foods and restaurants. Each trip, for me, is an opportunity to explore a new culture to inspire a new international dinner at Chez Nous.

London has everything, and no one discourages you from ordering a slice of cake with your cup of tea. I adore cake, and drink a heck of a lot of tea, so this was the place for me! I knew I wanted to have a proper High Tea during my travels. Tea was a luxury in many European cities because of how hard it was to come by. With the increase of steamboat and rail travel, tea became more attainable, but the cultural aspects of the elite “high tea” remain. Did you know how the term High Tea came about? Generally, the aristocracy would take their tea reclined on lovely couches amidst their most eligible companions, but High Tea would be taken at a proper table – literally, higher up!

I took my high tea at Cellarium Cafe after a tour of Westminster Abbey. Cellarium cafe is a historic storage room of the monks at the abbey. The lovely vaulted space was whitewashed and repurposed into an airy cafe that offers a wide array of sandwiches and cakes and a delicious, while affordable high tea! And you don’t need a reservation! The cafe is part of the Abbey, towards the end of the tour before the gift shop. However, it is accessible off the Dean’s Yard and is well worth the visit even if you don’t feel compelled to tour the Abbey itself.

I spent an hour quietly enjoying my cucumber, smoked salmon, and coronation chicken sandwiches (the three quintessential finger sandwiches served during high tea), before making my way to the lovely raisin scones with butter and strawberry jam that occupied the lower shelf of my tiered platter. I was very impressed with the cakes that were offered, they inspired me to rework some of my own recipes for my own High Tea coming up in a few weeks. The Cellarium served a pistachio cake with buttercream, a lemon tart with blackberry, a chocolate mousse in a chocolate shell, and a strawberry and cream sponge cake, all lovely accompaniments to a cup of Earl Grey, my favorite!

Do you guys have a chef that inspires you? Lately, for me, it has been Yotam Ottolenghi, the author of Jerusalem, Plenty, and NOPI. He was a big influence for my Jerusalem dinner a few months ago and is the person that inspired me to start burning eggplant directly on my stovetop. Try it, the flavor can’t be beat!

Before I did any other research, I knew I wanted to dine at his “grown up” restaurant, NOPI. I made reservations on opentable before I left for London to make sure I would get a chance to eat there, and as chance would have it (aka the only available table during my entire week trip), NOPI was my first meal in London after an amazing afternoon exploring the British Museum.

The menu is made to be shared, so if you are there with a large group, you are in luck! However, is you are traveling alone like I was, plan on ordering about 3 small plates. The menu is very interesting and full of new twists on Asian and Misdle-Eastern specialties. The staff is knowledgeable about pairings and are happy to help you build a delicious meal. I had a burrata with blood orange and lavender oil which was amazing! I love burrata and the pairing with orange instead of tomato was a revelation. I knew I wanted to try the famous twice-baked baby chicken (which really deserves its renown) and the recommended pairing of polenta chips with aioli was very lovely! I had a wonderful meal that made me forget all about my Jet lag and the fact that I hadn’t slept in two days.

It might seem weird, but take a trip downstairs in the restaurant to check out their open kitchen and amazing kaleidoscope bathroom! You will not be disappointed, especially if you enjoy the work of artists like Yayoi Kusama.

Ottolenghi has a series of  namesake sit down and take-away cafes throughout the city if you are looking for a quick bite while still experiencing some of his amazing flavor combinations. I had lunch at Ottolenghi on 13 Motocomb Street near the Victoria and Albert Museum. Visit his website for more locations and hours.

There is an incredible number of amazing Michelin Star restaurants in London. So many that you will rarely have enough time or money to have a proper sampling. I found a way to help out with the financial limitations though!

Most of those coveted two and three Michelin star spots serve either their same menu, or a limited menu for lunch and early dinner at highly discounted prix-fixe menus. Some of these restaurants, considered some of the best in the city include:

My favorite of these delicious looking options was Brasserie Zedel, self-proclaimed as the only true brasserie in London. I also appreciated that their prix-fixe manu lasted late into the evening allowing me to take advantage of the late openings of museums on a Friday night. I am very fond of French food, and know there is a large French community in London, so I wanted to take the opportunity to try their take on some of France’s classics. 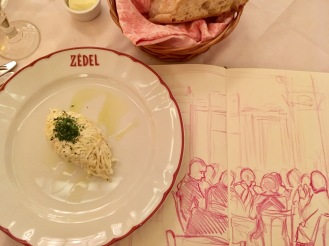 My three course menu included a Celery Remoulade which was served with a basket of delicious bread and butter. The main course was a crisply fried Trout with Almonds on a bed of root vegetables and summer squash. It was a lovely dish in the perfect sized portion. For dessert, I tried their isle flottante, floating island. I have never had this dessert and it was a very interesting flavor and texture experience. I will have to try to make it some day! The best thing? Their two and three course menus are just 9.75£ and 12.50£ and their set three course menu with a glass of wine is 19.75£.

Brasserie Zedel is in a lovely space with gilded corinthian capitals and high ceilings. If you draw as you eat like me, you will not get bored! In addition, I found out that in the evenings, there is a live band playing lovely classics and jazz. I spent the bulk of my evening eating, drawing, and chatting with some of my neighbors. Felt a bit like France, I must say!

Everyone knows to try Indian when they come to London, and having spent several months researching and cooking through traditional Indian food, I was incredibly excited to see how Londoners put their spin on the amazing cuisine.

At the recommendation of my best friend, Rafael Soldi, I went to Dishoom for dinner. Dishoom is a small chain of restaurants in London that are incredibly popular right now. The first night I went, I cued patiently with the rest of the excited diners for about a half an hour while the hostess kept bringing me homemade chai and sherry on the house. Once I got inside, the food arrived quickly and the flavors were really amazing! I tried two dishes that I have made myself the Lamb Biryani (I cook a goat Biryani) and the Black Dal (Dal Makhani). I was really impressed with the lamb biryani, the spices they combined in the rice were really spectacular and had me rethinking some of my own ideas. The black dal was delicious as well, but I must say, I like mine better! Stay tuned for the recipe 🙂 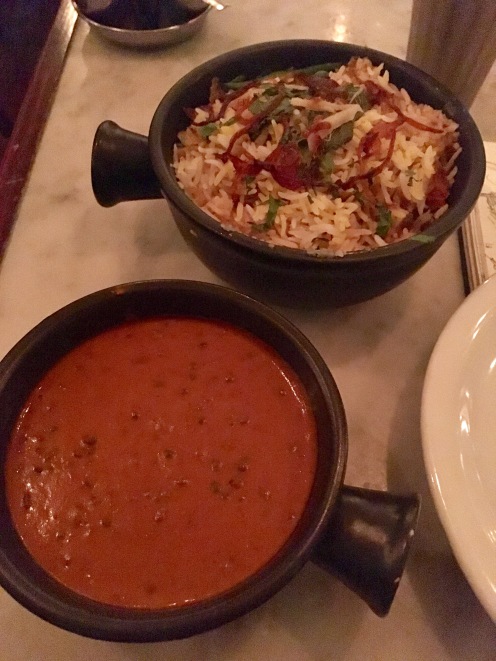 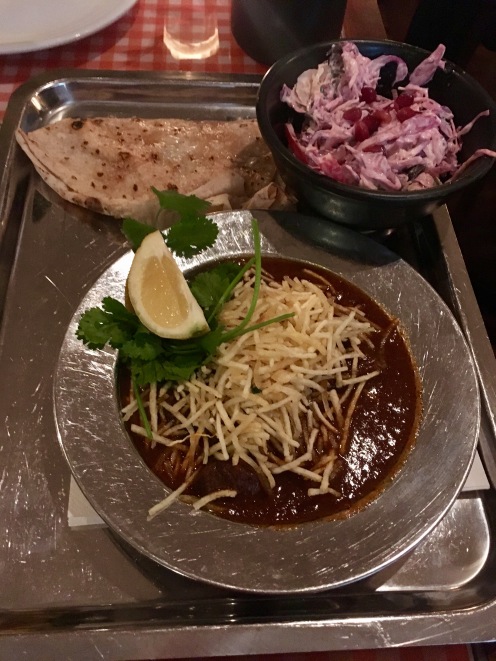 I loved the community feeling at Dishoom. I went twice, to two different locations, and each time, I got caught up in conversations with the tables around me, everyone wanted to be drawn, and the hostess kept serving free chai!  There are several locations of Dishoom, find them on their website!

While wandering around Soho on a chilly evening, I found Masala Zone. The cozy interior past the windows seemed so inviting that I decided to give it a try without any prior research. It did not disappoint!

It felt like proper Indian food, I have not been to India, but it was very reminiscent of the Indian meals I had when I was in Kuala Lumpur a few years back. I ordered a tray of thali, which was served with some delicious chapati. There was silverware on the table, but you didn’t need it.

The staff were lovely and generous at the Soho location and offered me a gulab jamun with ginger ice cream on the house for including them in my drawing. Definitely try their gulab jamun with ginger ice-cream! I will post my recipe for gualab jamun one of these days, but I never thought of this delicious pairing! Thanks Masala Zone! They have several locations as well, so find their hours and locations on their website!

If you are coming from America and have not visited London before, be ready for a few differences. Servers don’t hover over you and check in on you regularly, which is lovely for me as I sit and draw, however, if you do need something, it is not considered rude to flag down your server. So while you get to enjoy your time with your meal, be aware that popular restaurants have a lot of bookings and your table may be booked later in the night. Usually, your server will let you know until when you can keep your table. In nicer restaurants, you will be asked if you would like still or sparkling water. You can ask for tap, but I would avoid doing so at nicer places. While additional gratuity is not expected, an “optional” gratuity will already be added into your check, about 12-5% in most places I visited.