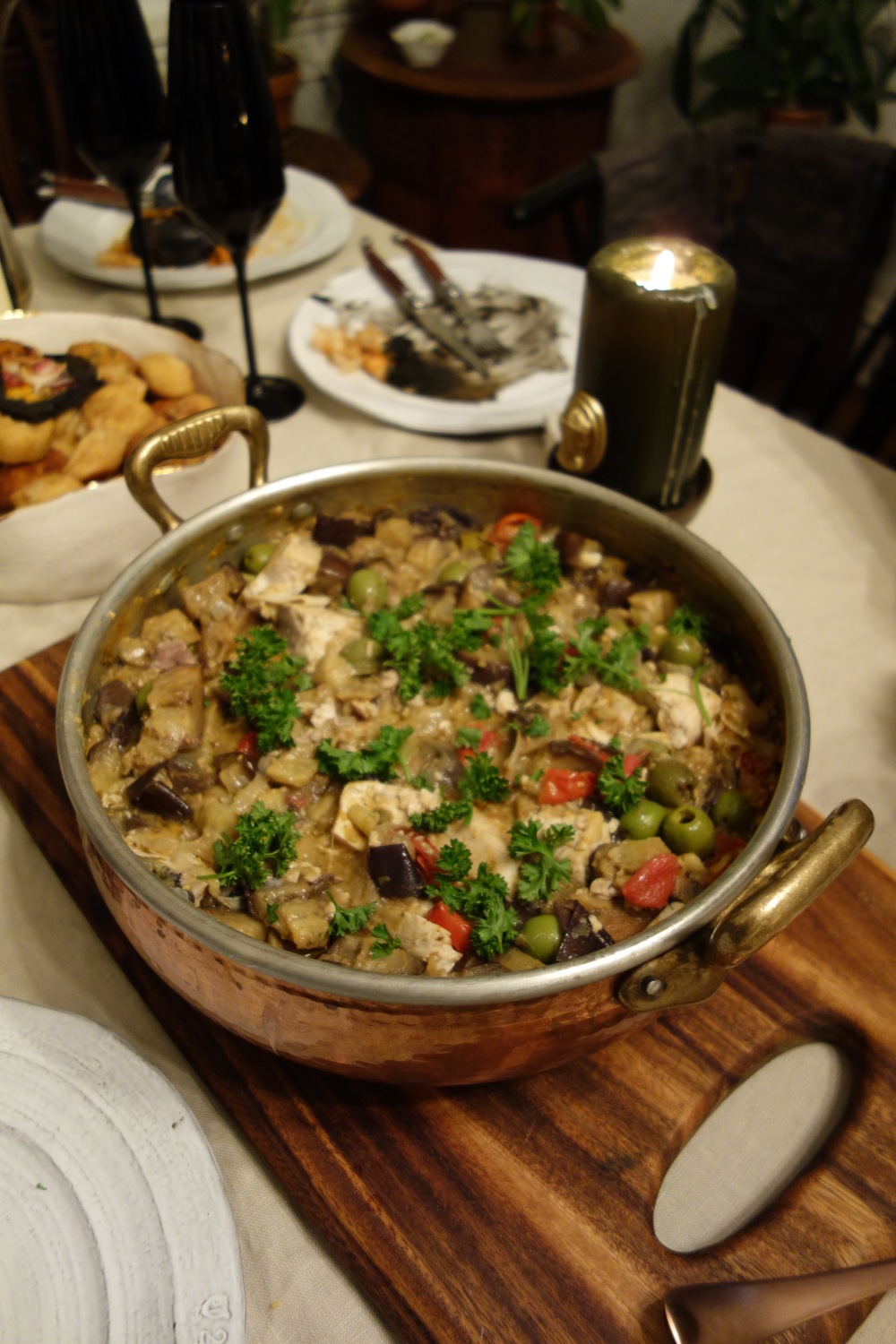 You must try the Sicilian Caponata, every guide book told me. It is the flavor of Sicily, they said. I did. I tried many varieties of the quintessential eggplant dish, and all were delicious. Generally, the dish involves eggplant, although my research has shown that it is the sweet and sour dressing of vegetables, not the eggplant that make a dish a caponata. But let’s be honest, most of the time it is an Eggplant Caponata!

Today, I wanted to share with you my recipe for the famous dish. Generally, I have seen capoata served as part of the Antipasti course, but I wanted to make some changes and bring it into the Secondi Course after the pastas. To elevate it, and make it worthy of the main course, I added some gorgeous swordfish steaks.

The dish turned out beautifully, and the best part? It is served cold so you can make it ahead of time. 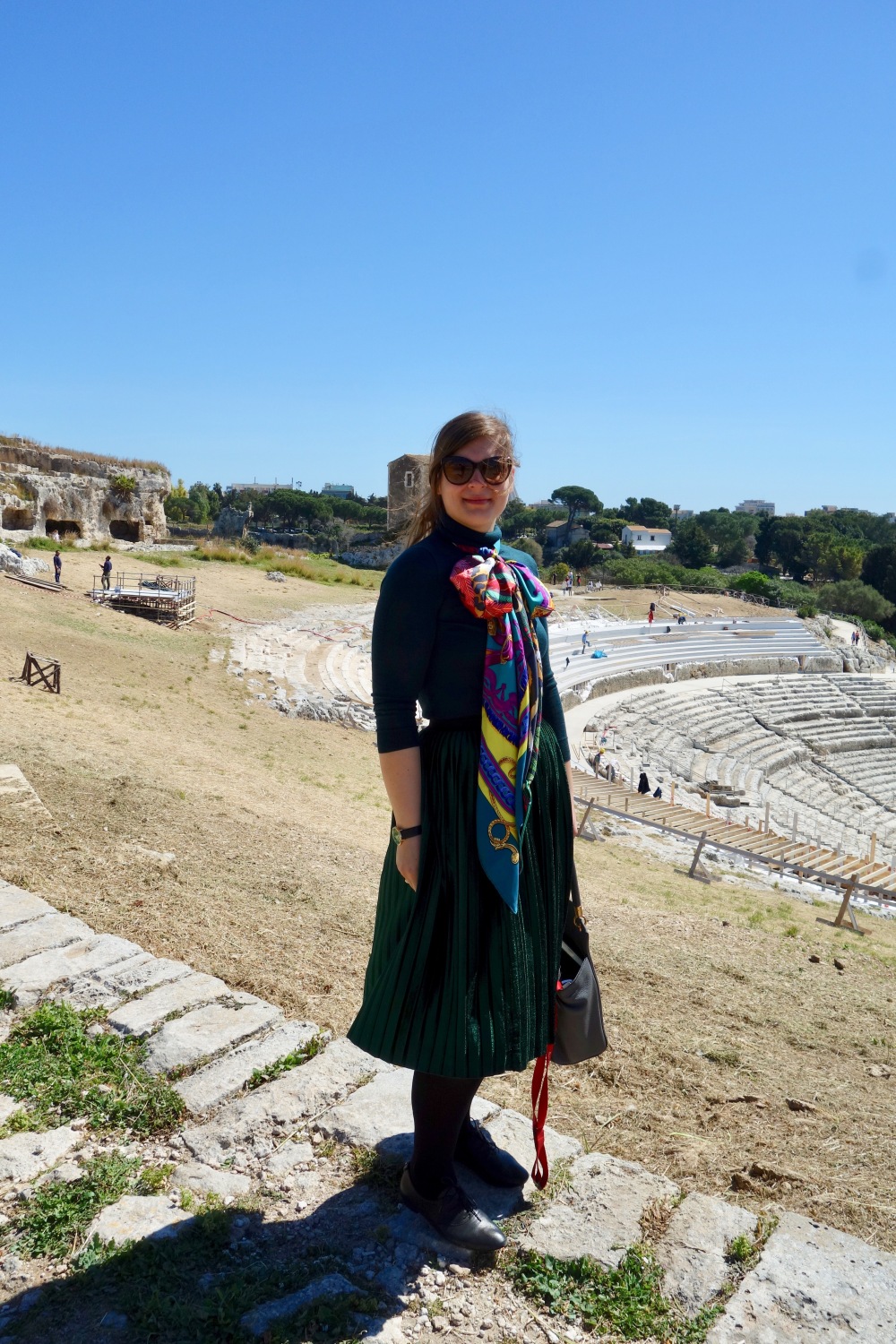 Just hanging out in Syracuse looking at ancient ruins!

Last month, I finally made my trip to Sicily, the glorious land of fish, beautiful food, sunshine and Greek and Roman monuments. I landed in Catania and fell in love instantly. I ate some of the best food I have ever had, and was inspired to create some really incredible flavor combinations. I love pasta, and truly appreciate the art of making fresh homemade pasta. With that said, I always consider pasta dishes as a delicious but simple thing to cook when I don’t feel like doing something complex and crazy. Fresh and simple….but…I learned that is not always the case. I ate incredible pasta dishes with complex (and frequently multiple) sauces that intermingled on my plate in an explosion of flavors and visual elements. Creamy ricotta balanced with pitch black squid ink like black snakes making their way through a white sand beach.

I was so thrilled to come home and share the incredible cuisine I experienced with our friends, and this past Saturday, I finally had the opportunity. We hosted 17 of our lovely friends for a traditional Sicilian meal, which, unlike our traditional 3 course dinners, sported four courses. As per Sicilian tradition, we started with an antipasti course of Arancini, Croquettes, and Bruschetta. 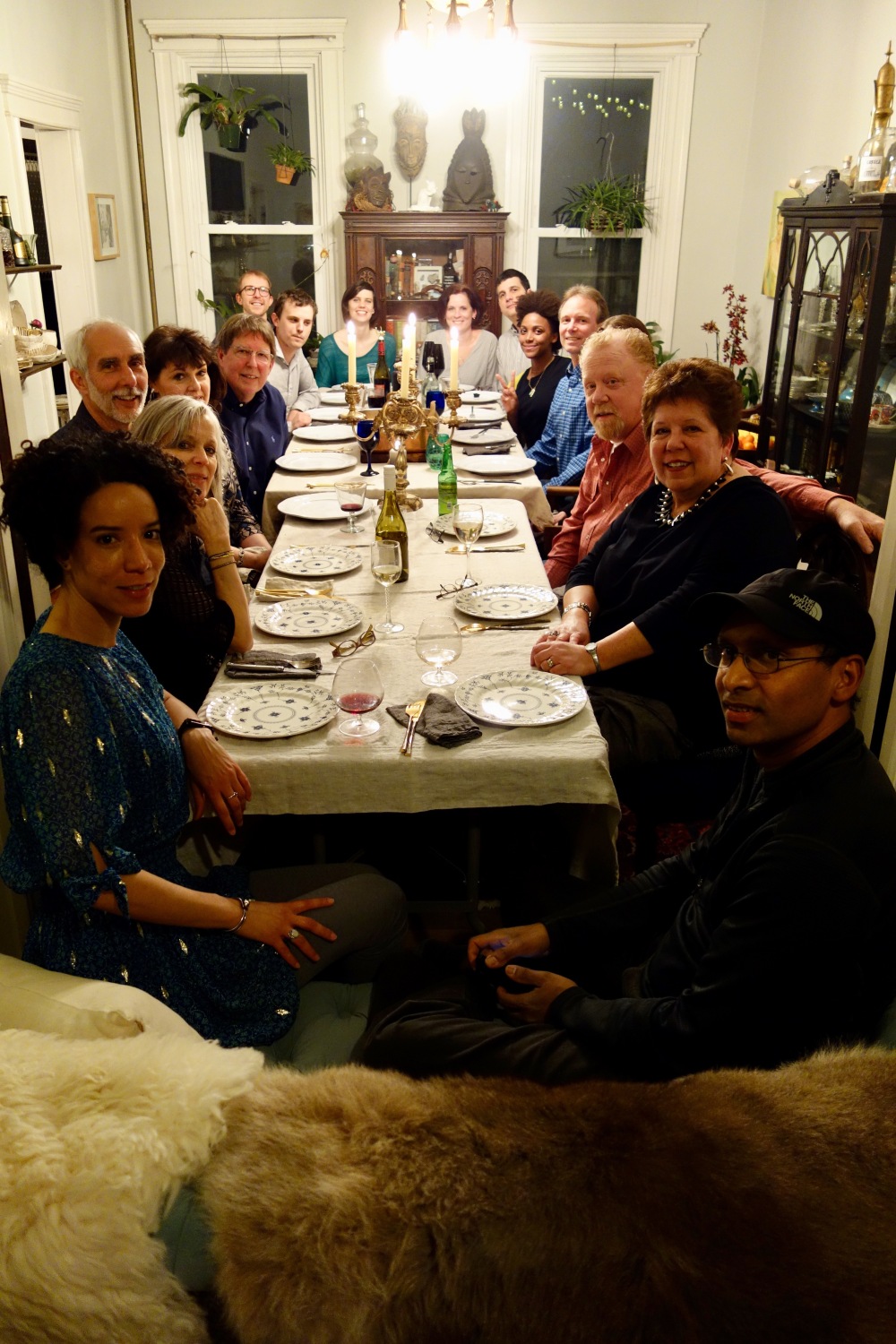 To start our meal, we made a trio of delicious Antipasti. If you are already a lover of squid ink, try my Squid Ink Bread, which we used to create a Sea Urchin and Lardo Bruschetta. Alongside the bruschetta, we served some Spinach Arancini. 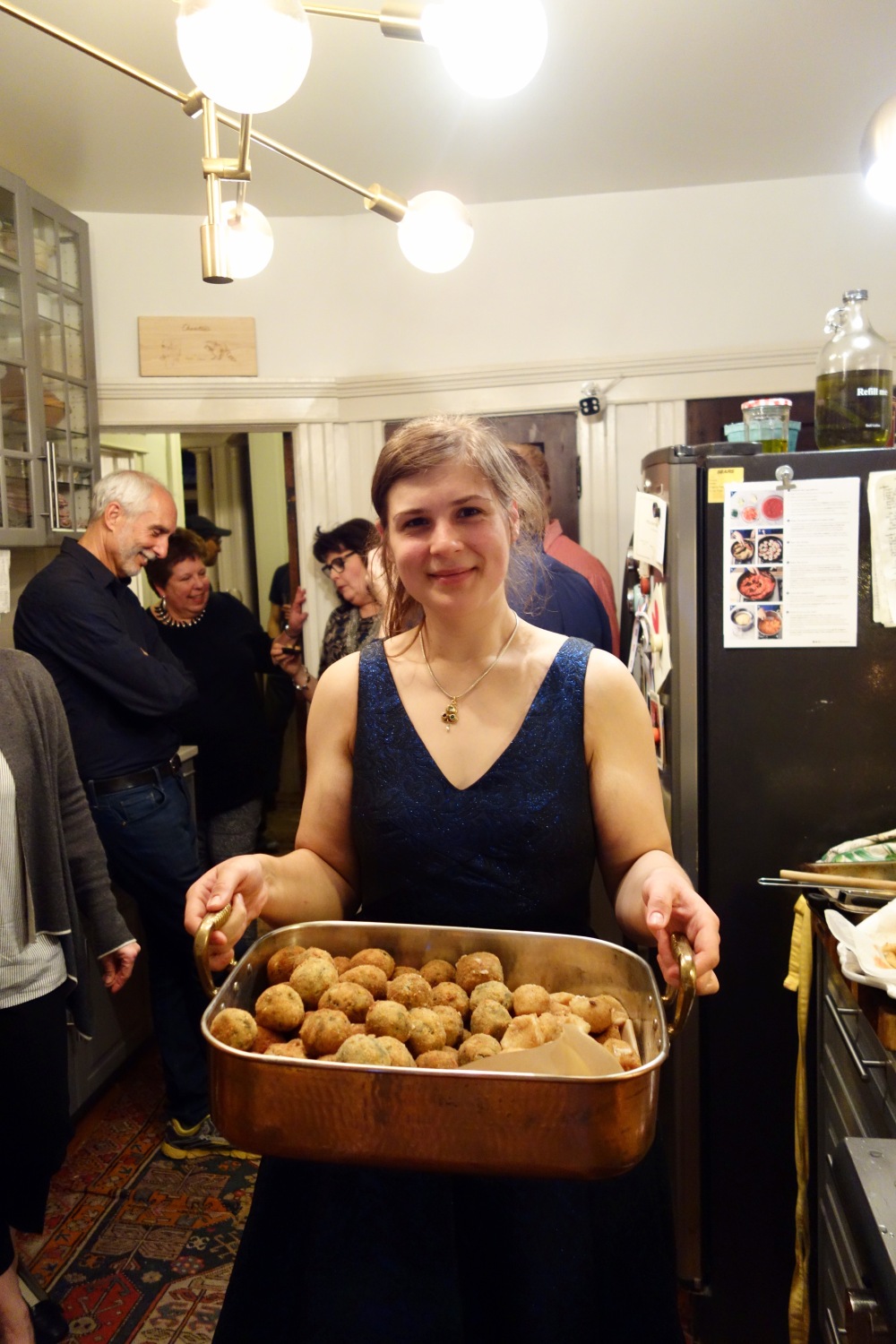 We also served some incredibly delicious Milk and Cheese Croquettes (the recipe for which I will not share yet, as I am still figuring out how to prevent them from exploding while frying….the taste is divine though!).

The Primi course, which follows the antipasti, is generally formed of a pasta dish of some sort, and we did not disappoint. We served a trio of delicious seafood pastas. I created a Handmade Pasta with a Creamy and Lemony Ricotta which paired with a Squid Ink Sauce. It was divine! In addition we created a Spaghetti Nero D’Avola with a spicy tomato sauce of Mussels, Razor Clams, and Prawns. Not sure what Spaghetti Nero D’Avola means? It means I boiled my pasta in the Nero d’Avola red wine from Sicily instead of water. I saw this for the first time in Sicily, and fell in love!  Our final pasta dish was one that seems a bit unconventional for Italy, but is actually a quintessentially  Sicilian dish, a Seafood Couscous!

The Secondi course generally consists of meats and fishes. We served an Eggplant Caponata with Swordfish, and a delicious and slow cooked Braised Lamb Shank Stew. Perhaps it was too much food, but I couldn’t think of a single dish to remove from the list.

We finished our meal with Cannoli made completely from scratch! Stay tuned for all of our recipes in the coming days! 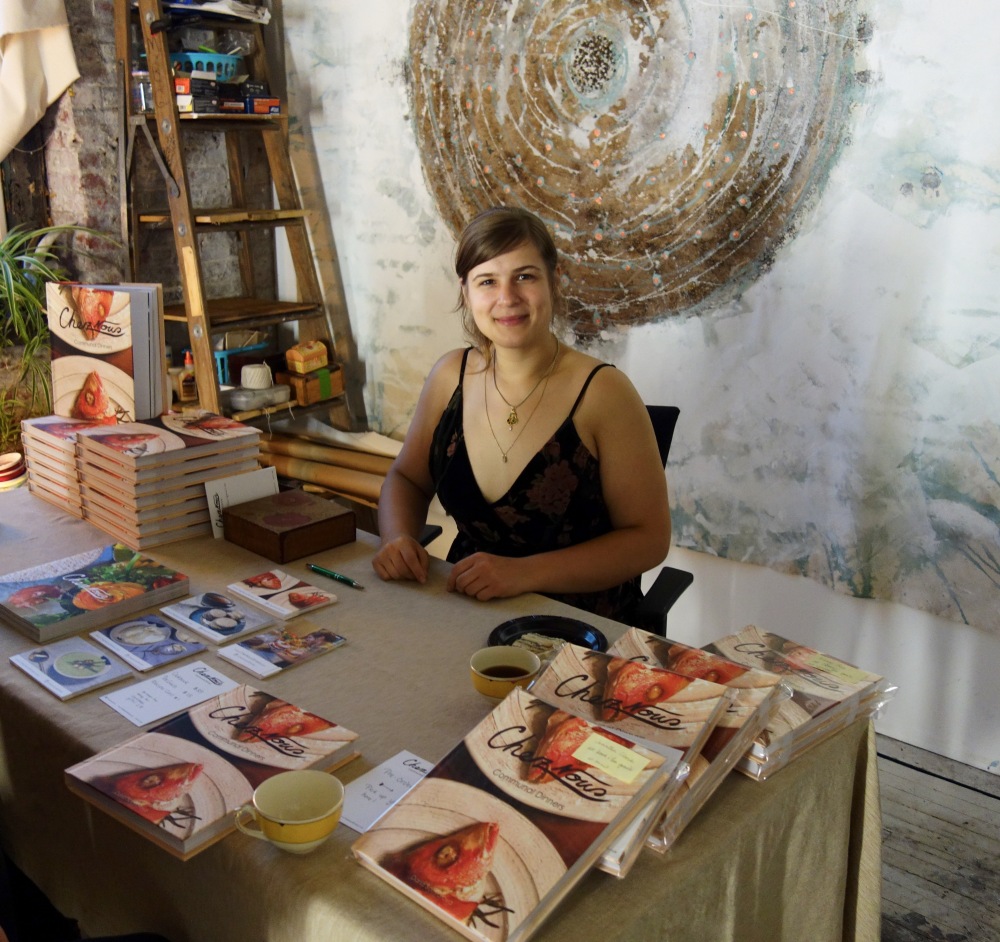